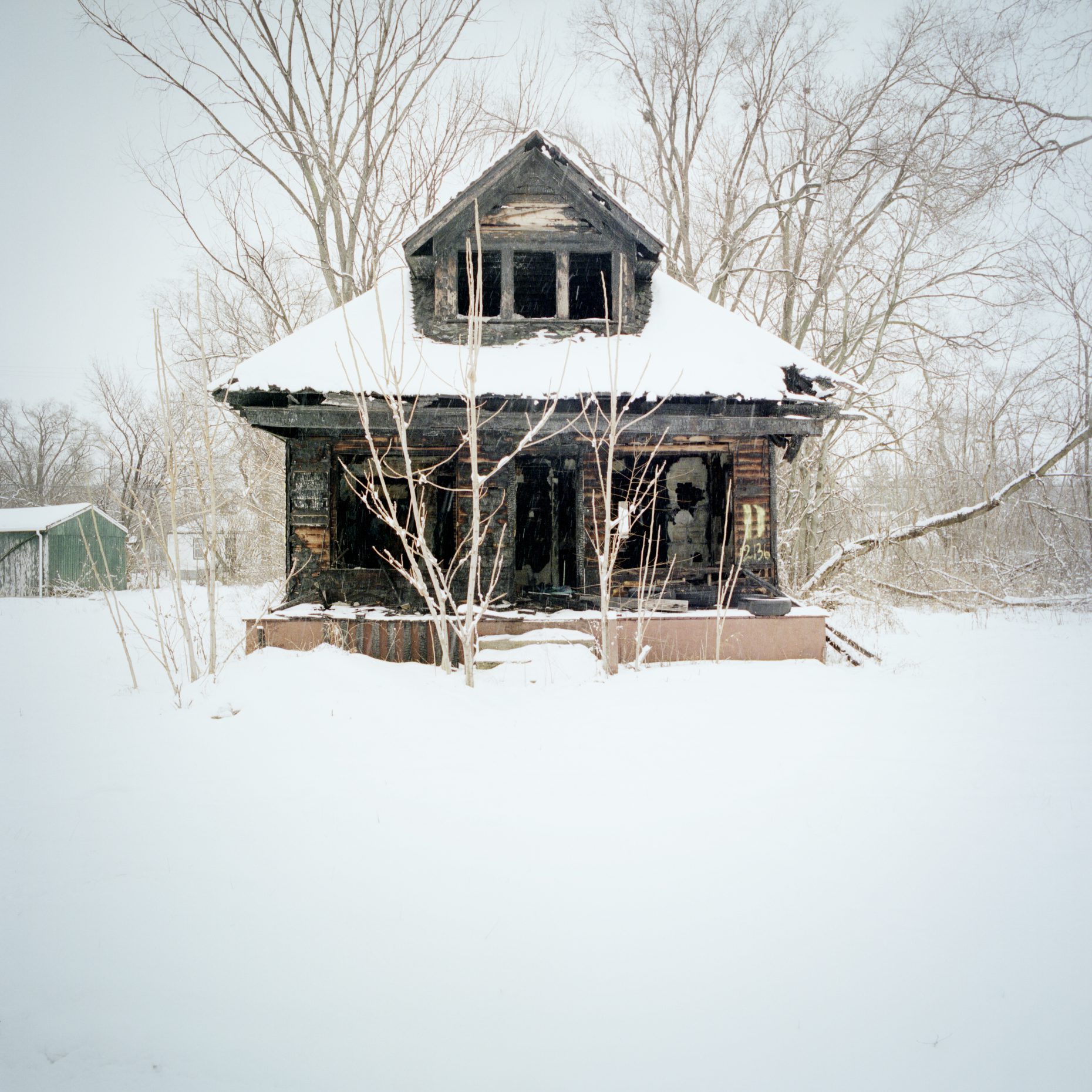 To see the entire series, or to purchase prints from the series, please go to: www.100abandonedhouses.com

The abandoned houses project began innocently enough roughly ten years ago. I actually began photographing abandonment in Detroit in the mid 90’s as a creative outlet, and as a way of satisfying my curiosity with the state of my home town. I had always found it to be amazing, depressing, and perplexing that a once great city could find itself in such great distress, all the while surrounded by such affluence.

Brush Park, on the outskirts of Detroit’s entertainment district was always an area of interest to me. For as long as I can remember the area, housing large houses and mansions, sat largely abandoned just a stones throw away from the Fox Theater, and not far from Wayne State University, the Masonic Theater, and even the central business district. How could an area that was obviously once a wealthy enclave in the city become an example of the downfall of American cities?

For years the area had signs advertising the redevelopment that was about to take place. It finally began to happen, with the construction of the new ballpark for the Tigers, and Ford Field for the Lions. New condos, and town homes began to appear amidst the rubble of burned out mansions turned apartments. Some of the houses were so large they became “loft condos”. As the entertainment district flourished, and Brush Park began to transform into something new, I realized the other approximately 135 square miles of Detroit was largely ignored. The excitement about Detroit’s “rebirth” took center stage, while much of the rest of the city was becoming largely abandoned. Even Brush Park itself was still largely abandoned, but with the remaining tenants of Brush Park buildings being pushed out, and many of the old houses torn down, I moved on to other areas, where Detroiters were attempting to make a life among abandoned and burned out houses. Often times, the neighborhoods were almost completely abandoned. In these neighborhoods I encountered concerned citizens, packs of wild dogs, 20 foot high piles of toilets, and houses with the facades torn off, filled with garbage.

As the number of images grew, and a documentary style emerged, I switched from mostly black and white, to color, and decided to name the series 100 Abandoned Houses. 100 seemed like a lot, although the number of abandoned houses in Detroit is more like 12,000. Encompassing an area of over 138 square miles, Detroit has enough room to hold the land mass of San Francisco, Boston, and Manhattan Island, yet the population has fallen from close to 2 million citizens, to most likely less than 800,000. With such a dramatic decline, the abandoned house problem is not likely to go away any time soon. 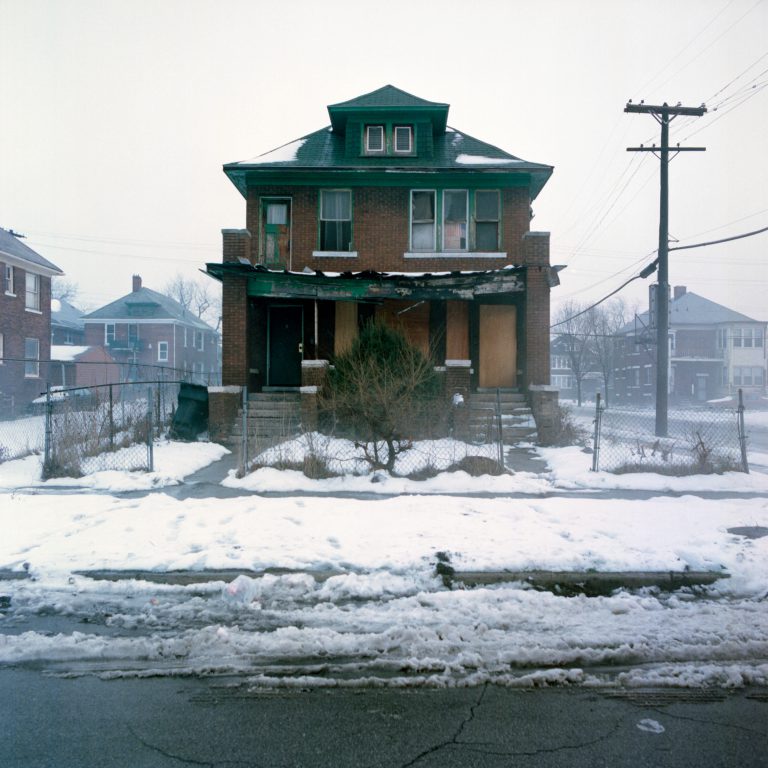 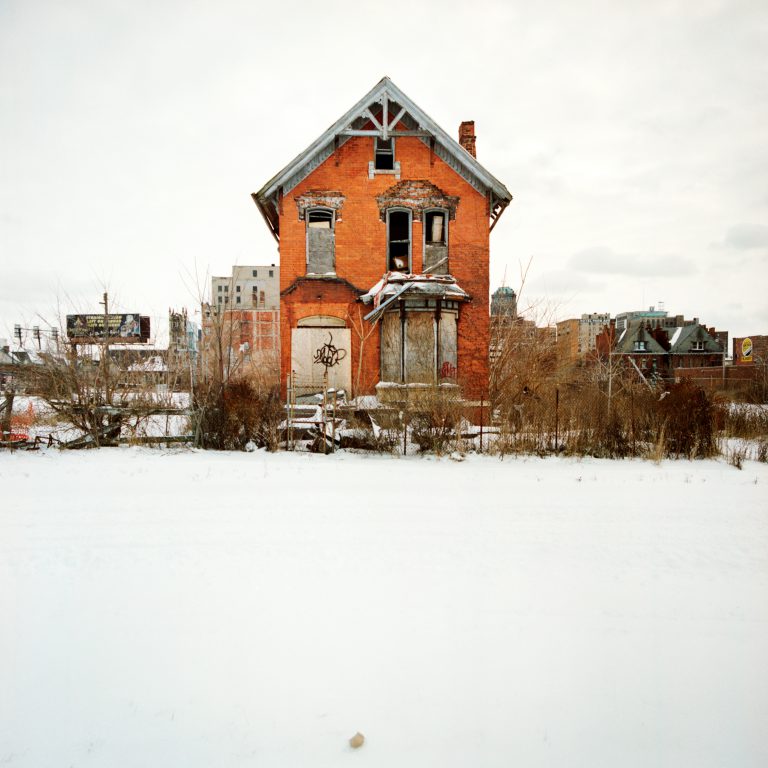 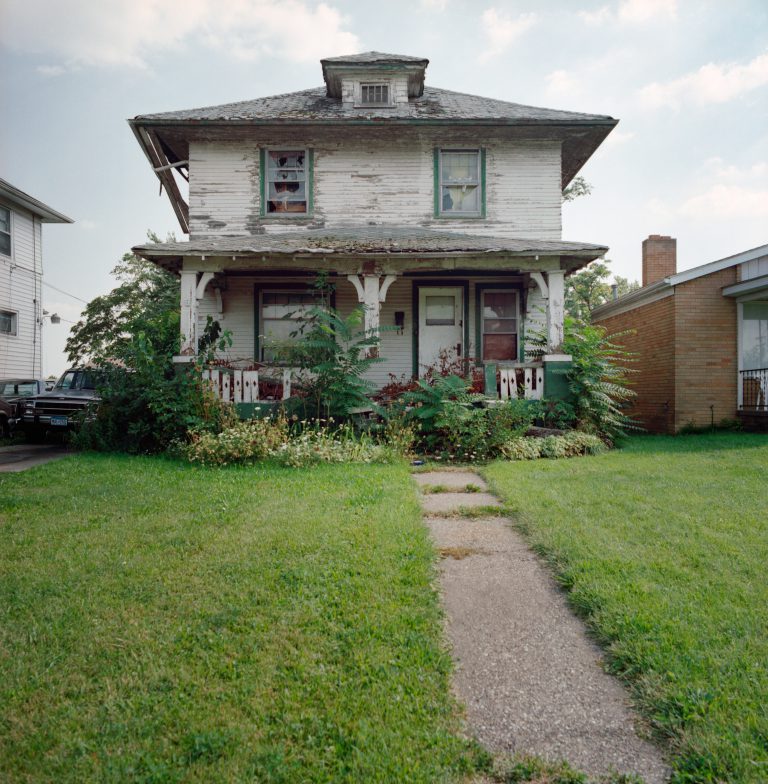 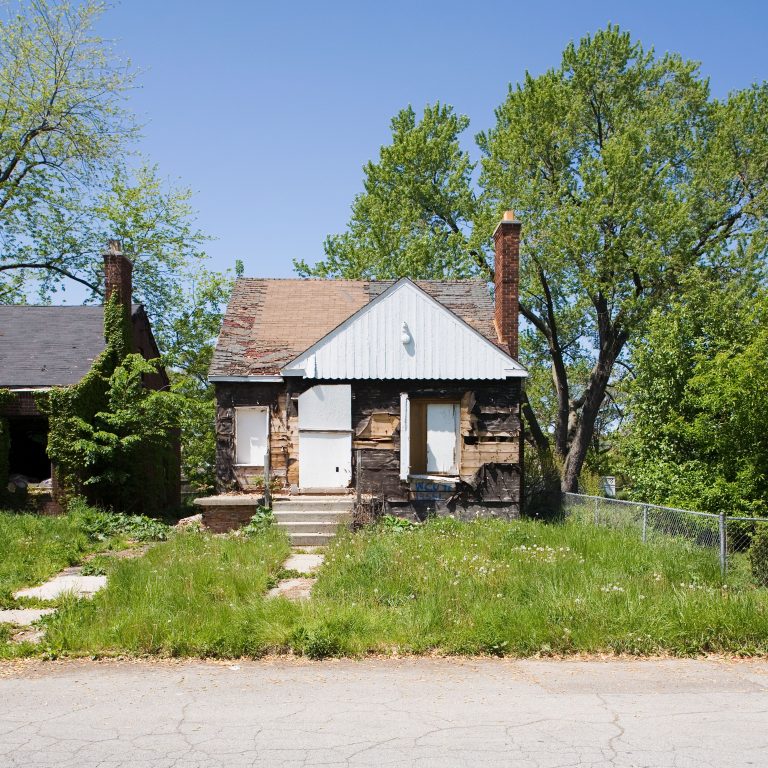 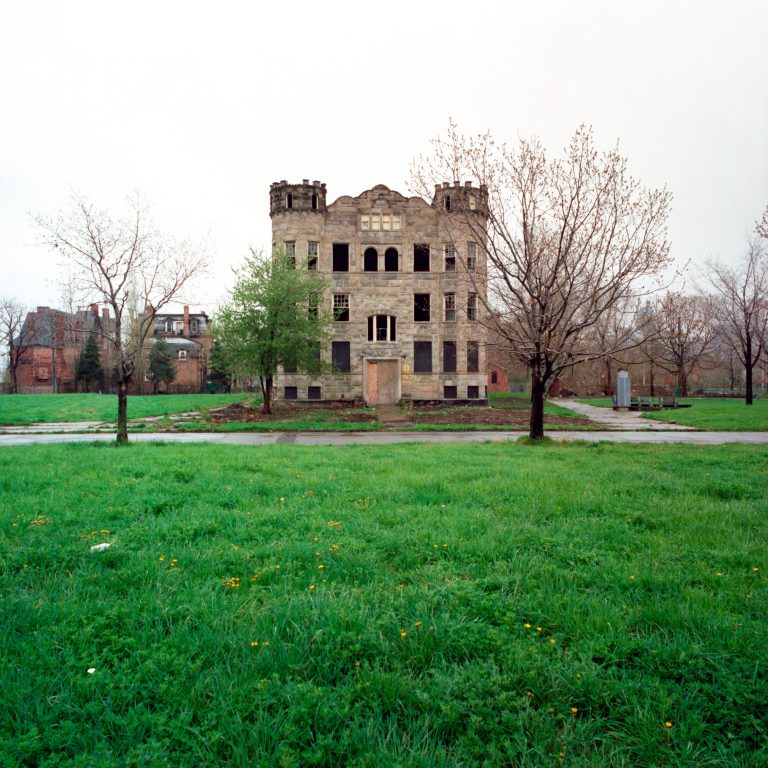 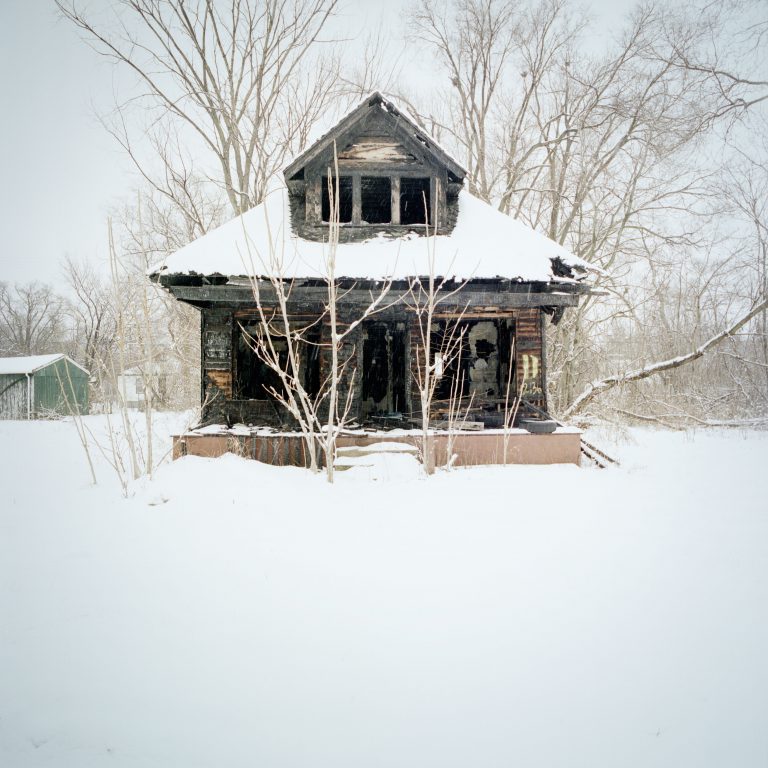 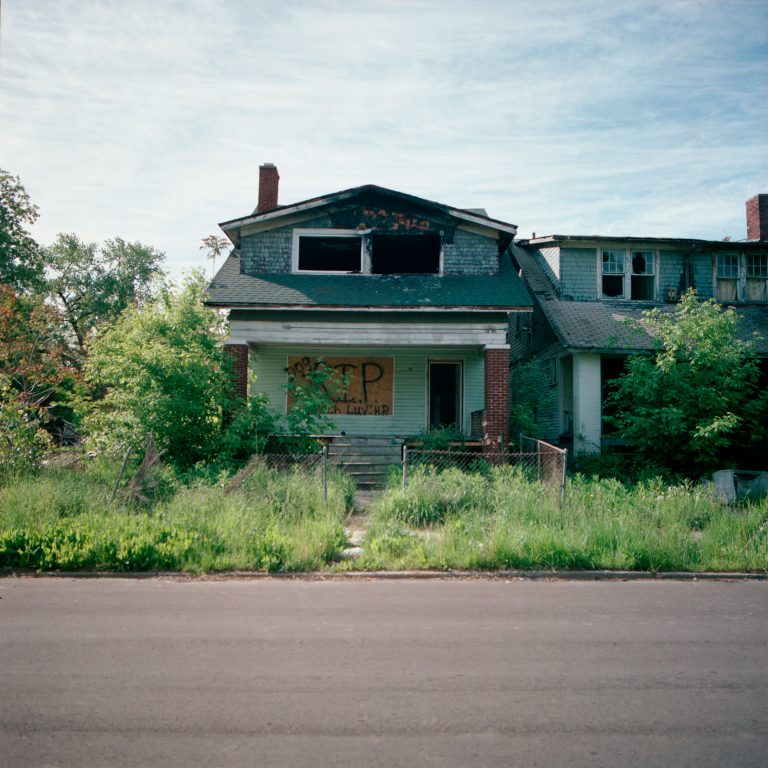 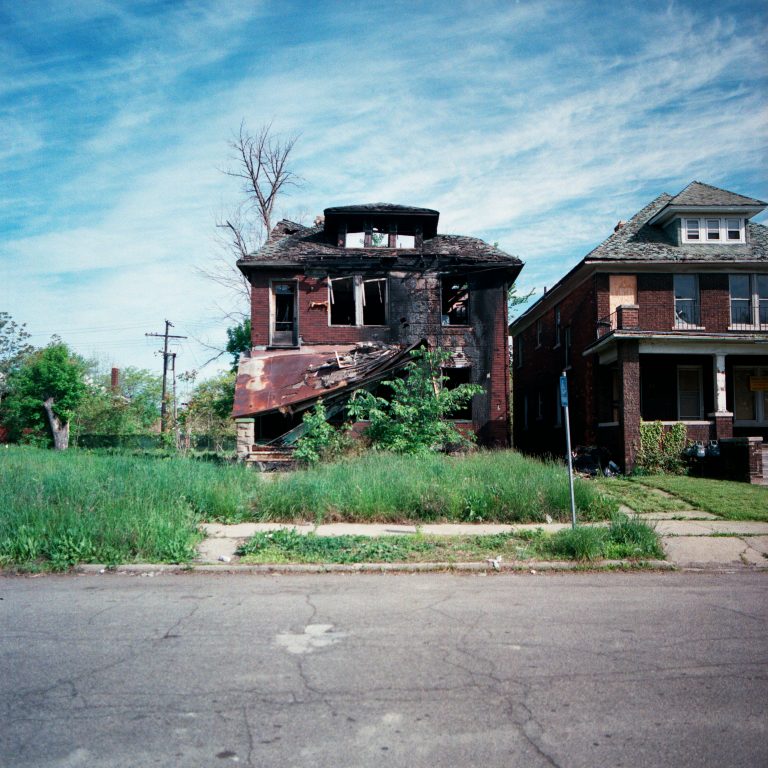 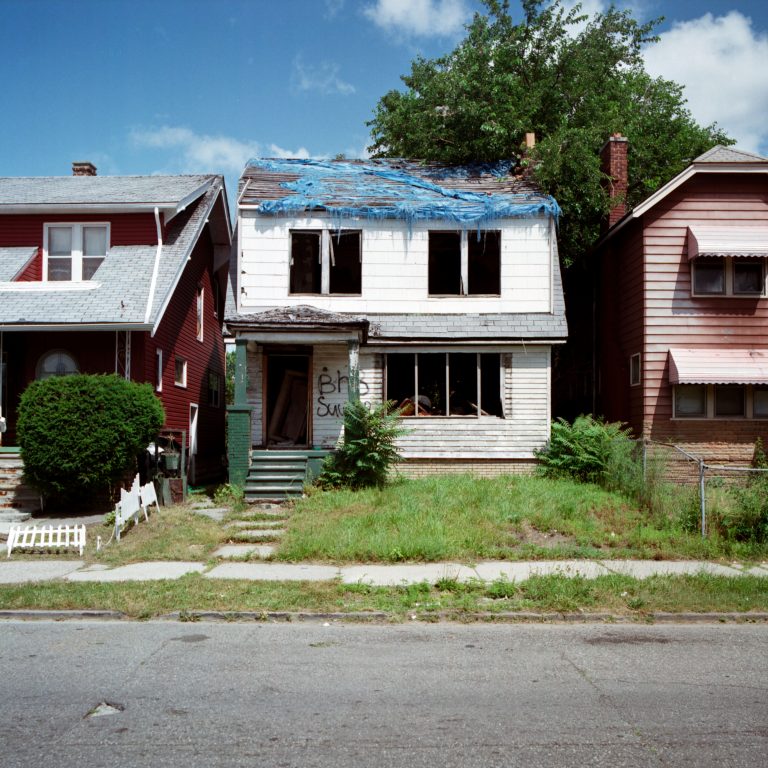 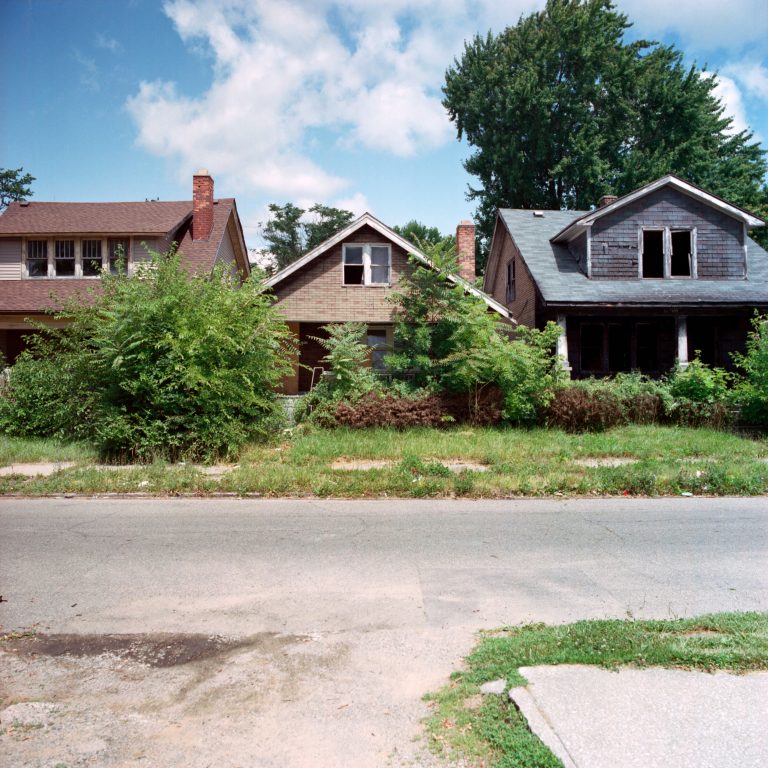 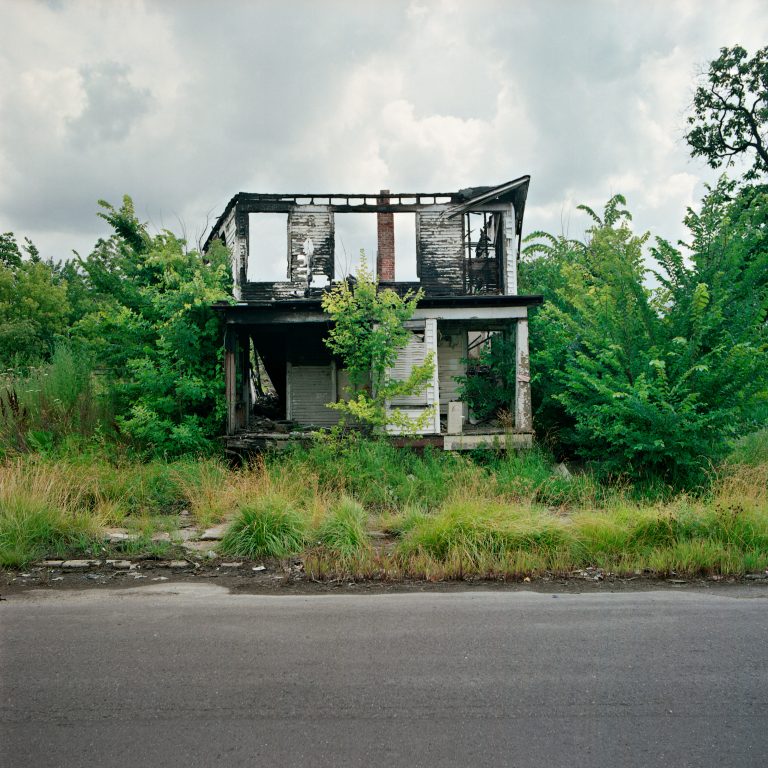 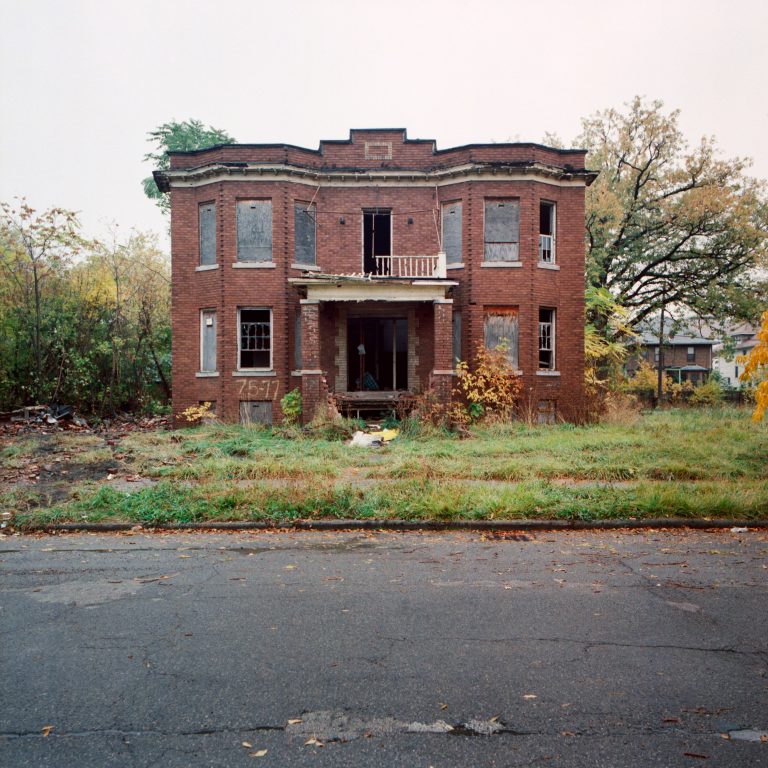 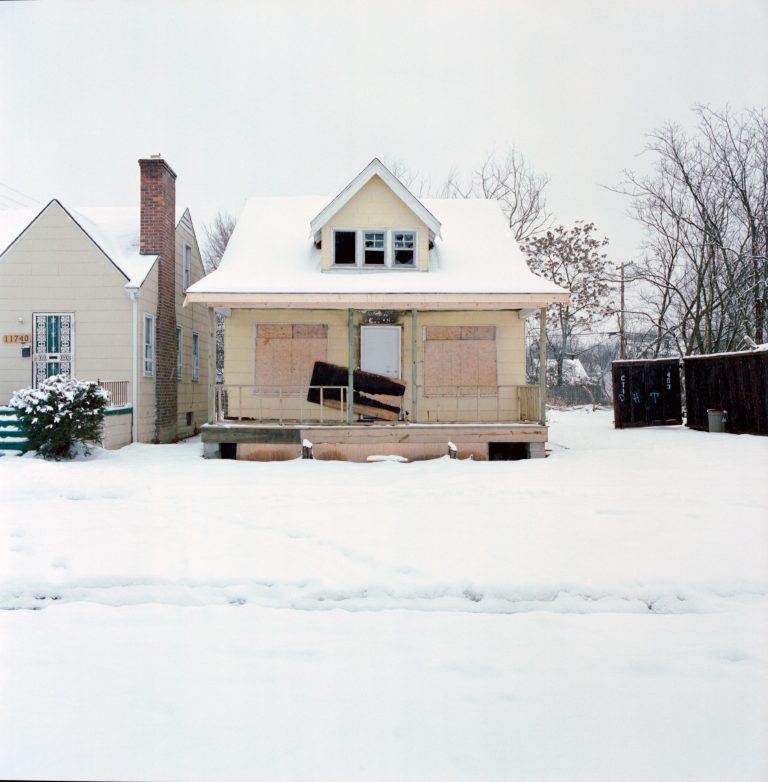 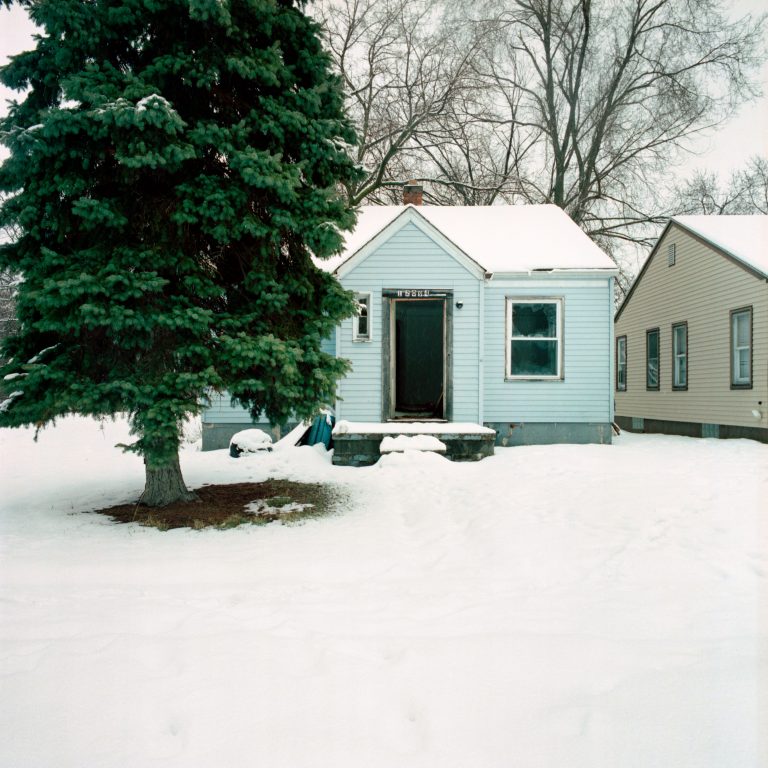 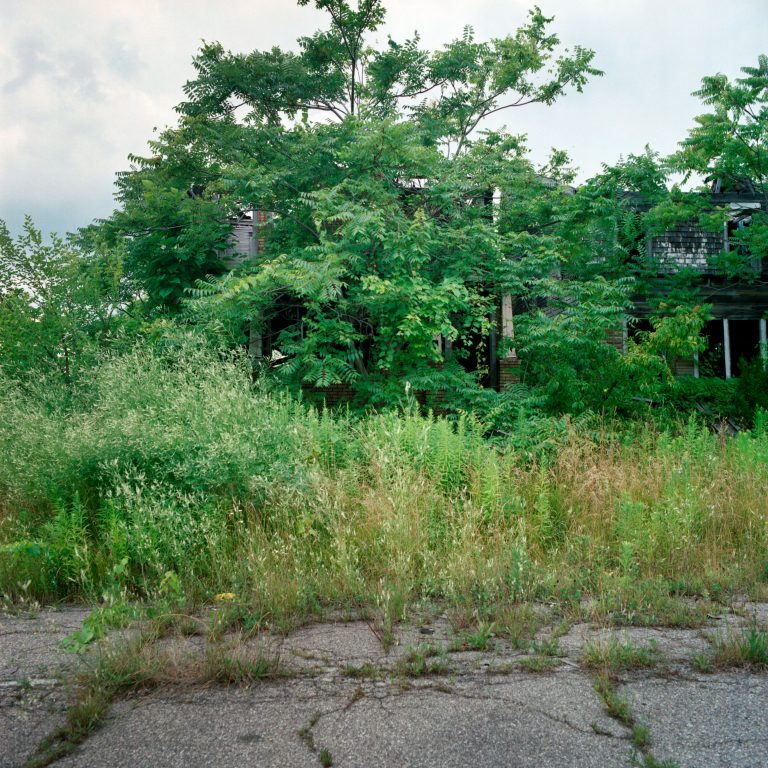 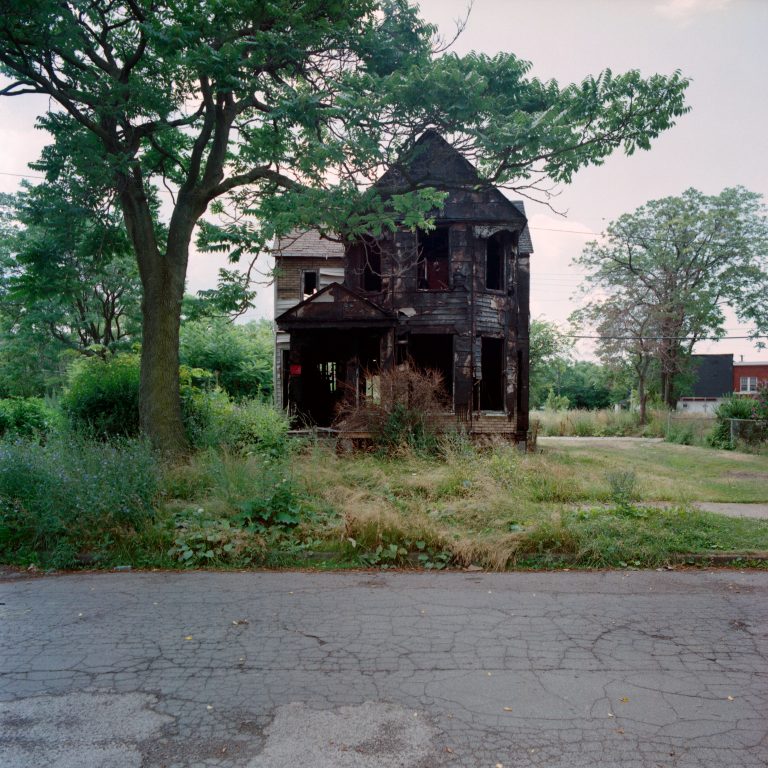 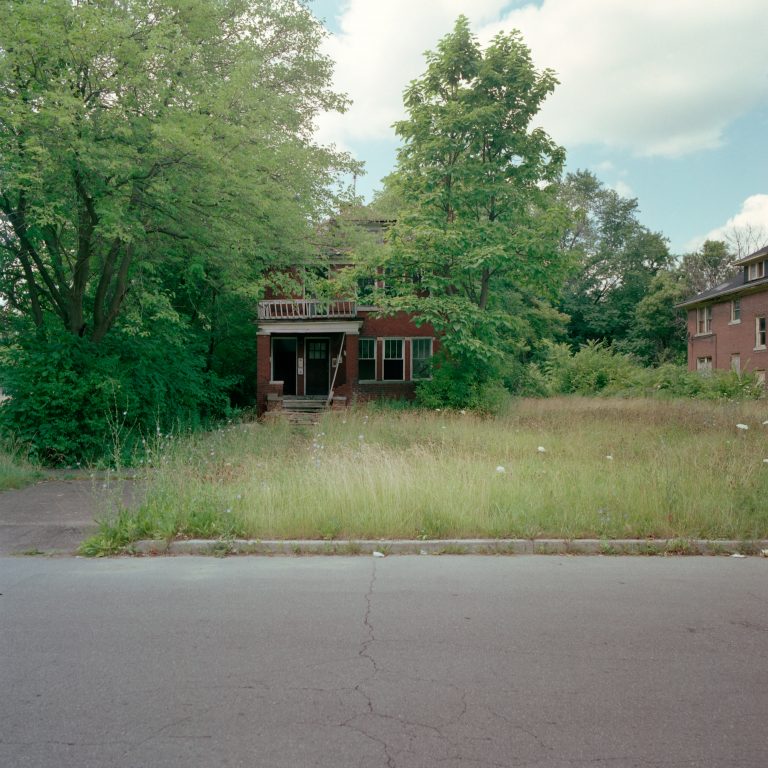 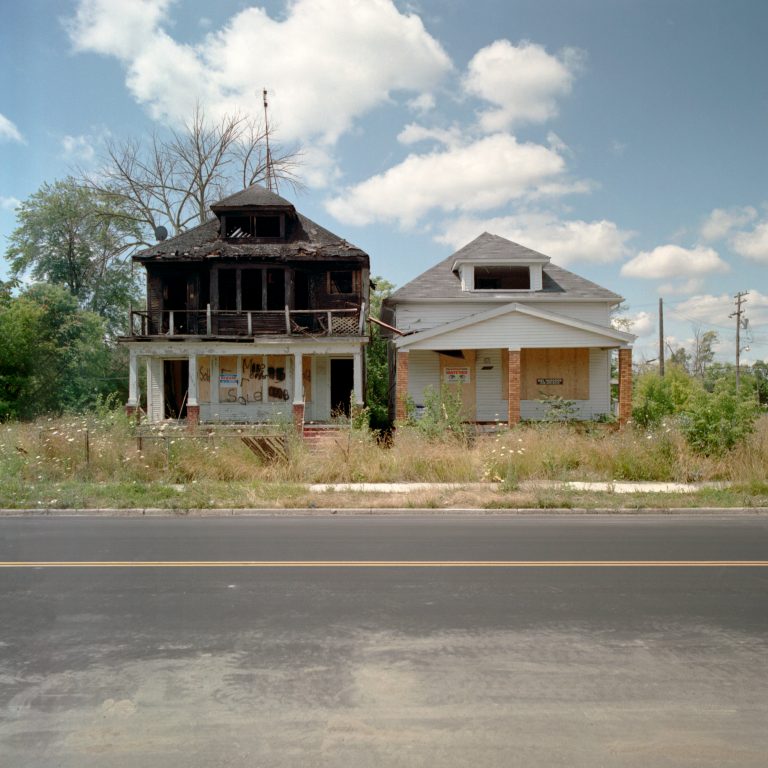